Established in 1997, the Katharine J. Densford International Center for Nursing Leadership is the nation’s first university-based center dedicated to improving health care worldwide through the development and promotion of nurses as leaders. The Center is committed to helping nurses transform their thinking, partner effectively with others, and create needed change.

Toward that end, the Center serves as a catalyst for generating new ideas; convenes leaders from nursing, other disciplines and organizations to collaborate strategically; and is charged with advancing the science and scholarship of nursing leadership. The Center is named after Katharine J. Densford, an internationally known leader and Director of the School of Nursing from 1930 to 1959.

Through events, programs, research and education, the Densford Center honors the legacy of nursing, explores current issues, and informs the future of health care policy. 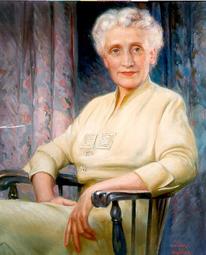 Katharine J. Densford, director of the University of Minnesota School of Nursing from 1930 to 1959, was an independent and visionary woman who changed the face of nursing in Minnesota and across the globe. She held offices in almost every nursing organization of the time and, more importantly, she was an agent for social change. Through her influence, the School of Nursing helped redefine how leadership could benefit patients, nursing and health care. In 1997 the Katharine J. Densford International Center for Nursing Leadership was created to perpetuate the legacy of this pioneering hero, and to assist nurses in addressing today’s challenges in much the same spirit as Katharine Densford.

We wish to give credit for this section of our website on the life of Katharine Densford to Lauren Kay Glass, PhD, for Katharine Densford Dreves: Marching at the Head of the Parade. Thesis submitted as partial fulfillment of the requirements for the degree of Doctor of Philosophy in Nursing Sciences in the Graduate College of the University of Illinois at Chicago, Health Sciences Center, 1983.

Katharine Jane Densford was born in Crothersville, Indiana on December 7, 1890 to a farmer and a music teacher. She grew up on a farm with an older brother, Bill, and an older sister, Mabel. During her childhood, Katharine was strongly influenced by her mother who stressed self-improvement, maintaining broad interests and working to the best of one's ability. Katharine and Mabel were offered the same opportunities in their play and education that Bill had. Katharine modeled herself after Bill in her education, professional involvements, ambitions and energy. Bill was a physician, farmer and journalist.

In 1914, Katharine received a BA degree in history and Latin from Oxford College for Women and Miami University in Ohio, followed by an MA degree in history in 1915. In those days before women's suffrage, it was unusual that female children from a middle class family had a planned education that included college.

It was World War I that pulled her into nursing; her sense of service and love of democracy made her want to 'do something' for the war effort. Later in 1940, she reflected: "Ever since I can remember I wanted to do something worthwhile, and I always felt that there was something I must do - you might call it a mission. It did have to be something that was needed, and that was worthwhile."

Her nursing education began at the University of Cincinnati School of Nursing and Health in 1920. Katharine, the only one in her class with a Masters of Arts degree, received her Diploma of Graduate Nurse Degree in October. Inspired by the teaching of Dr. Charles-Edward, she took an interest in Public Health and moved to Ohio to begin her nursing career. A few months later this was briefly interrupted with a special trip to North Carolina for training in tuberculosis nursing to improve her "service to the community." By 1922 Katharine became an expert on these two subjects and went back to the University of Cincinnati until 1925 as Instructor of Tuberculosis Nursing and Public Health Nursing. During this time, her first manuscripts were published, some of which were articles on tuberculosis nursing.

Katharine soon moved to Chicago to hold the positions of Assistant Dean of the Illinois Training School for Nurses, and Assistant Director of Nursing Service at Cook County Hospital. She became more active in professional nursing, attaining a number of firsts for herself during the decade of the 1920s: her first trip to Europe; her first paper at a national convention, the National Organization for Public Health Nursing in Atlantic City; her first experience as a visiting professor at the University of Florida; her first national committee service (the National League for Nursing Education's Committee on Education); presiding at a state meeting (the Illinois League of Nursing Education); and attending her first international meeting, the International Council of Nurses in Montreal, Canada.