Climate change has become a public health emergency yet addressing it still feels like a daunting task for most. What if you could quantify the impact of making small lifestyle changes on reducing greenhouse gas emissions?

Now imagine 28 million nurses around the globe role modeling practical and effective climate solutions. That is the goal of the Nurses Drawdown movement launched earlier this summer.

Nurses Drawdown offers steps that nurses can take to engage in evidence-based climate solutions and join a community of nurses from around the world who are working for a healthier future. It is a project of the Alliance of Nurses for Healthy Environments (ANHE) and Project Drawdown, a nonprofit organization that seeks to help the world reach a point where levels of greenhouse gases in the atmosphere stop climbing and start to steadily decline; but its creation traces back to the School of Nursing.

The school itself is bold and innovative in that there’s space to think of new ideas and space to color outside the lines, to think in nontraditional terms. Creative solutions can be born at the school. There is space to dream possibilities.

The idea for Nurses Drawdown came from Teddie Potter, PhD, RN, FAAN, clinical professor and director of Planetary Health, who had been using the book Drawdown: The Most Comprehensive Plan Ever Proposed to Reverse Global Warming in one of her courses.

“I remember thinking we’ve got the science to show these actions work, the challenge is to activate people to scale these actions,” says Potter.

After vetting her idea with the ANA’s Expert Panel on Environmental & Public Health, Potter approached Project Drawdown with a proposal to partner with nurses as the messengers. As the largest global health profession, nurses have the potential to make a significant difference. More importantly, as the most trusted profession, they can role model the solutions to patients and communities and generate even greater scale.

Through a democratic and non-hierarchical planning process, Project Drawdown’s 100 solutions were reviewed and five themes that reflected an alignment between core nursing expertise and effective evidence-based solutions were selected. Those themes are:

Energy: Supporting a clean energy future by promoting energy efficiency and advocating for a transition to renewable energy

ANHE developed NursesDrawdown.org to share the impact each focus area could have and offers a variety of simple ways nurses could make a difference. Tucker Annis, BSN, RN, a Doctor of Nursing Practice (DNP) student and planning committee member, decided to increase his use of public transportation and bike to his job as a nurse informaticist with University of Minnesota Physicians.

“If you want to improve your health, save some money and save the planet, join Nurses Drawdown,” says Annis, a DNP Bentson Scholar, in one of the inspirational videos used in social media.

For Huffling, who is a student in the Health Innovation and Leadership specialty of the DNP program, joining meant switching her home electricity to wind power and eating a more plant-based diet. “It’s super easy to do. It’s healthy for you and for the planet,” she says. “Taking that first step is so important. If just 5% of nurses participate, that’s more than a million nurses doing one thing.”

Including students in the creation of Nurses Drawdown was intentional.

It would have been an immense waste of talent to not tap into their skills and abilities,” says Potter. “They’ve grown up in the climate change era. They’ve grown up seeing that their future is threatened. They have the passion, the vision, the hope and the eagerness for change.”

“Our training and the work we do to identify system fail points and come up with creative solutions gives nurses a framework to think about problems and leverage change that can take it to the next level,” says Phillips.One of those students was Claire Phillips, MN, RN, a self-identified systems nurse who is pursuing her DNP in the Health Innovation and Leadership specialty. She says it was nursing’s capacity to change the world that attracted her to the profession.

Phillips, who led the social media efforts for Nurses Drawdown and partnered with a classmate from the University’s College of Design to create its logo, appreciates that she’s been able to pursue projects that she’s passionate about in her studies.

“I think the University of Minnesota, and particularly the School of Nursing, are supportive of making sure that your specific career interests fit into your coursework,” she says.
Huffling’s DNP scholarly project was launching Nurses Drawdown and enlisting nurses and nursing organizations worldwide.

“I’m really proud to be at a school that recognizes how important it is for nurses to be engaging on climate change and to be leaders around addressing it,” says Huffling. “It is such an important factor in the health of our communities.”

Become part of the climate solution

One solution offered on the site is switching to a plant-rich diet. It’s estimated that 43-68 gigatons of emissions could be avoided just from dietary change. From practicing Meatless Monday at home to starting a farmers’ markets at a hospital, Nurses Drawdown shares ways to create a healthier future for humans and the planet.

Learn more and become part of the movement at NursesDrawdown.org. 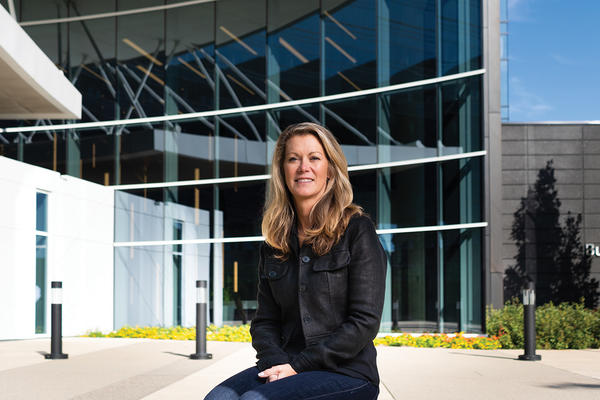 Adapting and transforming - We fulfill our North Star mission