The idea for an expanded nursing role for pediatric primary care by public health nurses was proposed in 1962 and 1963 by Henry K. Silver, M.D. (Perspectives 20 years later, 1985). Loretta Ford understood the potential and became involved in 1964. Senior level academic nurses resisted the concept in Colorado and elsewhere, but most practicing nurses were supportive. Silver and Ford had two goals: to provide health care to children and to expand and improve the role of the nurse. She noted that graduate education in nursing was in transition in the early sixties from functional majors (supervision, administration & teaching) to clinical specialties. The profession was “clamoring for nurses to become increasingly clinical, collegial and collaborative with physicians…” She insisted that the shortage of medical manpower was not the impetus (Perspectives, 1985). Over the next 20 years, program sponsorship varied from medical schools, hospitals, community agencies and, belatedly, collegiate nursing schools. Over time, there was an evolution from the original health and wellness orientation to a more medical and disease orientation. 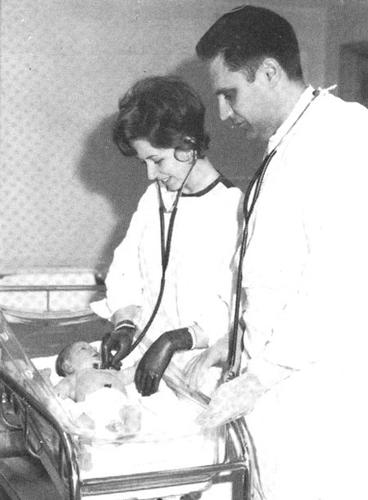 In the early to mid-1960s, Alma Sparrow was in charge of Washington state’s program for rural maternal and child health. She heard about the work of Ford and Silver and participated in a group of public health people convened to discuss the primary health of children and families in underserved areas. Upon her return to her native Minnesota, she tried to introduce the nurse practitioner (NP) concept to her colleagues in the university’s School of Public Health. As in other parts of the country the idea was not well received. Marion Murphy, then head of public health nursing, was among the detractors who “thought it was terrible to take up the work of the doctors” (Legge, L, 2000).

See One, Do one, Teach One. Sparrow succeeded Murphy after she left the university. Sparro began searching for money to launch NP education, primarily to pay physicians to work with her. With support from Senator Hubert H. Humphrey, the first of many grants was obtained from the Division of Nursing of the U.S. Public Health Service Bureau of Health Professions, Health Resources and Services Administration.

In 1969 Barbara Leonard was enlisted to write a grant proposal to develop a pediatric “post-baccalaureate certificate for ambulatory child health care ,” as the program was dubbed in the first grant. She, pediatrician Homer Venters, and Alma Sparrow went to Washington to meet with the officials of the Division of Nursing. Their proposal was supported by pediatrician Peter Boelens as well as Venters. They also received support from the Minnesota Nurses Association. A five-year $750,000 grant was awarded in September 1970. (1971)

Leonard together with MPH student, Mary Kay Stanik, began the process of preparing themselves for the NP role. Drs. Peter Boelens, Robert Fish and Robert TenBensel were very supportive and helped them develop skills in history taking and physical examination. The faculty also received instruction from health psychology faculty members and many other pediatric faculty including cardiology and pediatric neurology. Ms. Stanik practiced at a Wayzata clinic with another NP and Leonard went to Group Health.

Once a curriculum was developed by Leonard and Boelens, a one-year pilot program was launched in 1970 with five students. Upon receiving the federal grant, the program was integrated into the two-year MPH and MS programs. There apparently was no requirement for the curriculum to undergo formal evaluation by the School of Public Health or the Graduate School. In the early 1980s, the Milbank Memorial Fund issued a report recommending that Schools of Public Health get back to their basic missions and relinquish the training of clinicians, e.g. NPs and others. Both the PNP and the Adult Health NP programs were terminated as a result of the School's desire to adhere to the recommendations of the Milbank report. By 1982 the practitioner programs were discontinued as part of this philosophical change to de-emphasize clinical training in the School of Public Health (Green, 1993). The program was transferred to the College of St. Catherine in the fall, 1983, where it was operated as a certificate programs until becoming part of a new master’s degree program.

Barbara Leonard, who had moved to the Division of Maternal and Child Health in the School of Public Health, was recruited to the School of Nursing in 1991 as a tenured associate professor. She established the pediatric nurse practitioner (PNP) master’s option in 1992. By 1994, she had obtained support from the federal Maternal and Child Health Bureau (MCHB) for the Children with Special Care Needs Training Program, one of only seven and later 5 programs funded nationally. It was continuously funded until the MCHB discontinued the program in 2013. Upon Leonard’s retirement, Ann Garwick took over leadership of the Children with Special Care Needs Training Program.

Phase 2 of the DNP program began in Fall 2009 when a program was offered for nurses with baccalaureate degrees. It was designed to prepare students for advanced practice certification and included the DNP completion courses developed for Phase 1. It used a combination of traditional on-campus classes and web-based formats. At that time, the school stopped admitting students to the master of science (MS) program. The clinical specialization portion of the curriculum was very similar to that of the MS curriculum although revisions for the DNP curriculum were made to ensure that the studies were at a doctoral level.