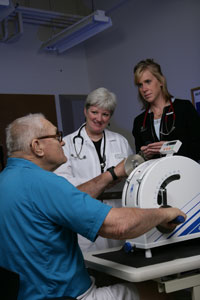 Soon after implementation of the PNP program in the School of Public Health, students interested in adult populations began requesting preparation as practitioners as well. A pilot program with four students began in 1971. Two students, Elaine Cooley Richards and Eva Anderson Vraspar wrote a grant proposal to the Northland Regional Medical Program for a five-month adult/geriatric nurse practitioner (ANP) certificate program. Additional faculty were added in 1973, 1974 and 1975: Shirley Conley, Sharon Ostwald, Lois Miedema and Patricia Lentsch Schoon. Under Ostwald’s direction, the program was accredited by the ANA in 1976 and extended to nine months for the 1978-1979 year (Richards & Ostwald, 1983).

During this time, Marilee Woehning Miller joined the faculty to implement an ANP option within the two-year public health nursing master’s program. Prepared at Wayne State University in its second class of Adult Health Nurse Clinicians (1970-72), she was recruited to return to Minnesota by Alma Sparrow. Miller became the program coordinator for five or six years. The first students were admitted in 1972 with five from the School of Public Health, five from the School of Nursing and five-seven from the University of Minnesota Hospital. Ellen Egan and Beverly Dorsey were designated as coordinators for nursing and the hospital, respectively (Green, 1993).

By 1982 the practitioner programs were discontinued in the School of Public Health as part of this philosophical change to de-emphasize clinical training in the school (Green, 1993). Because the School of Nursing refused to take over the nurse practitioner preparation, the programs moved to the College (now University) of St. Catherine.

Gerontological nurse practitioner and clinical nurse specialist. By the 1990s the School of Nursing faculty had achieved considerable expertise in gerontological nursing. A Center for Long Term Care for the Elderly was established in 1989 and was succeeded in 1998 by the Center for Nursing Research on Elders and in 2003 by the Center for Gerontological Nursing. Under the leadership of Mariah Snyder and Muriel Ryden gerontological nurse practitioner and clinical nurse specialist options were proposed and approved for the master’s curriculum in 1991. This addition came after considerable discussion, political organizing, and controversy among some of the faculty members. Marilee Miller, who had joined the School of Nursing faculty in 1989 as Associate Dean, provided major support and know-how. She remained in the position until her retirement in 2003. [There is no discrepancy in dates. Marilee worked at the SPH for several years before leaving the University. She returned here in 1989 as indicated.] 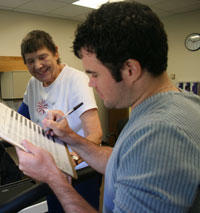 In the beginning clinical leadership for the gerontology options was provided by Kay Jones, GNP and Pat Camillo, GNP and WHNP. Later Karen Fjeldt, GNP joined the faculty in 1996 and Mary Zwygart-Stauffacher, GNP and GCNS in 1997. When these individuals left the University, gerontology leadership was taken up by Jean Wyman, Fang Yu and Kristine Talley.

During Phase 1 of the Doctor of Nursing Practice (DNP), specialty preparation continued at the master’s level. Only applicants with master’s preparation were admitted during to the DNP program during Phase 1.

Phase 2 of the Doctor of Nursing Practice (DNP) program began in Fall 2009 when a program was offered for nurses with baccalaureate degrees. It was designed to prepare students for advanced practice certification and included the DNP completion courses developed for Phase 1. It used a combination of traditional on-campus classes and web-based formats. At that time, the school stopped admitting students to the master of science (MS) program. The clinical specialization portion of the curriculum was very similar to that of the MS curriculum although revisions for the DNP curriculum were made to ensure that the studies were at a doctoral level.