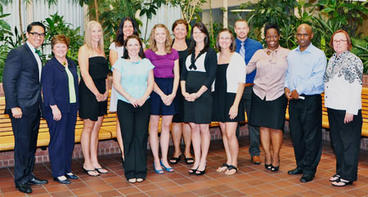 For seven years, the School of Nursing collaborated with the Minneapolis Veterans Administration (VA) School of Anesthesia to provide a pathway for anesthesia students to earn a master’s degree in nursing. They received the anesthesia related portion of the program from the VA School and then completed the requirements for the master’s degree at the University of Minnesota. In 2004, the Regents approved the transfer of the program and full financial responsibility for the nurse anesthesia program from the Minneapolis VA School of Anesthesia to the University of Minnesota School of Nursing.

The formal agreement called for the three VA faculty members, including director Kathleen Fagerlund1, to be involved in selecting applicants for the nurse anesthesia major from those who met requirements for admission to the Graduate School. The three became contract faculty with the School of Nursing with the rights and responsibilities of all other contract faculty. (Contract faculty is the term that was used for non-tenure track faculty.) They were also given the opportunity to apply for regular tenure track positions at a later date if they wished. Upon transfer of the program, the three faculty members became eligible for membership on school committees, including the Curriculum Committee.

The courses previously offered under the auspices of the Minneapolis VA School of Anesthesia went through the approval process to become university courses upon transfer of the program. When the school discontinued the master’s options and launched the Doctor of Nursing Practice (DNP) program for individuals with baccalaureate degrees in nursing the nurse anesthesia program also made this transition. It became the first cohort of DNP graduates to qualify for certification by the National Board of Certification and Recertification of Nurse Anesthetists (NBCRNA).

1 The other faculty members were Kathryn White and Garrett Peterson.