No cure exists for post-traumatic stress disorder (PTSD). No medicine or treatment can comprehensively vanquish the painfully persistent condition.

“But you can learn to live with it,” said Bridget Gehrz, a Doctor of Nursing Practice (DNP) student at the School of Nursing who hopes to help military families manage the effects of PTSD and thrive.

Through the DNP program’s Integrative Health and Healing specialty, Gehrz is learning a holistic approach to promoting health and wellness while preventing and managing disease. And, as the widow of a former U.S. Navy corpsman who died by suicide, assisting veterans and their families is her priority.

“As I’ve experienced this grief journey and suicide loss, my eyes have opened to a whole bunch of different things and different ways of healing,” said the mother of three.

In June, Gehrz earned a place in the Pat Tillman Foundation’s 2019 class of Tillman Scholars, a prestigious honor for active duty service members, veterans and military spouses that comes with financial support, professional development and an expansive network.

After reading about the scholars program and previous winners, Gehrz nearly didn’t apply.

“It was so intimidating,” said Gehrz, who grew up in Starbuck, Minnesota, a town of 1,300 in western Minnesota. “I still see myself as this teeny-tiny little small town girl, and this, to me, is just a huge network that I have never had access to before. And so I hope it will provide me with some mentorship opportunities.”

Gehrz has worked in intensive care units, burn centers, cardiovascular floors and the emergency room over the course of a career that’s included serving in Boston and North Carolina. She had always planned to return to school for an advanced degree, but marriage, a move back to Minnesota, motherhood and her husband’s reacclimation to civilian life shelved those aspirations.

Michael Gehrz medically retired in 2008, having sustained traumatic brain injuries while serving in Iraq. He contended with chronic migraines and PTSD and was less than a year away from getting his degree from Metro State University in St. Paul when he died in 2014.

Rather than focusing explicitly on suicide prevention in her work, Bridget Gehrz wants to help veterans manage their PTSD symptoms and to promote holistically healthy lifestyles among military families.

“I am more drawn at this point to the families, to the other wives, husbands or partners, and to the kids,” she said. “As I’ve helped my kids through this and I’ve met other kids on this journey, there are so many amazing things, and they really are super resilient. Giving them these skills, whether there’s trauma or not, is important to me.”

The DNP program’s integrative health and healing specialty, the first of its kind in the United States and one of 12 specialty tracks in the DNP program, teaches personalized care that draws on evidence-based therapies and empowers patients as partners.

The three- or four-year program includes coursework in traditional nursing topics like physiology and pharmacology, as well as topics such as botanical medicines, wellbeing and resiliency, meditation and healing imagery. That holistic nature was a large part of the appeal for Gehrz when she first heard an advertisement for the program on Minnesota Public Radio in 2016.

The benefits have extended beyond her professional pursuits; courses like Food Matters and Reiki Healing have influenced her daily life. Her 6-year-old son, Aksel, regularly asks her to practice Reiki, an alternative Japanese energy therapy, on him.

“It’s been a lot about self-discovery and self-growth, and realizing, I think, how much I needed this to learn these skills for me,” she said.

Gehrz said she’s frequently asked how she balances raising three kids—ages 5, 6 and 7—with school. Her answer? Schoolwork is a joy, not a burden, and it fuels her to keep going.

“I try to bring my whole self to everything that I do,” she said, “and despite all of the challenges in my life right now, I still take a positive outlook to it and I believe that we can do good, and I can do good.”

News from the Center for Children with Special Health Care Needs

News from the Center for Nursing Informatics 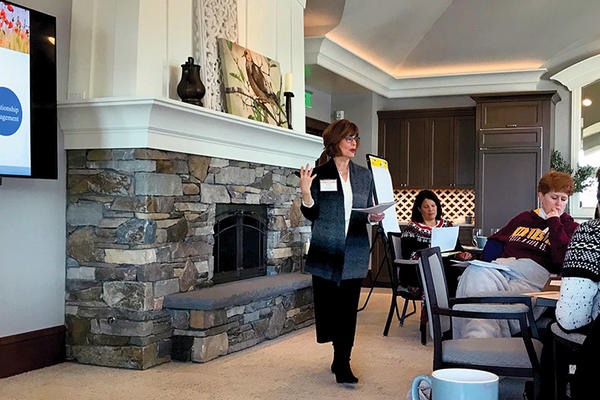