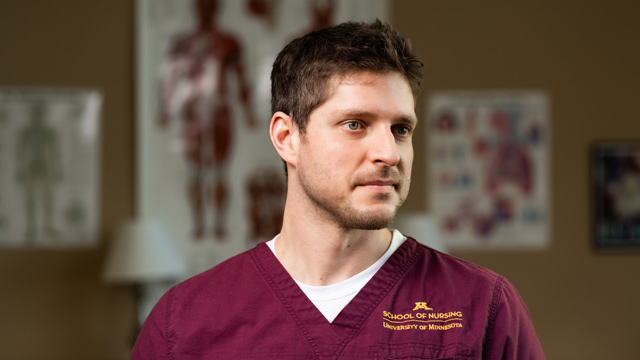 Nearly four years after graduating from college, Maks Karpyak faced a situation that scares just about every young adult: moving back in with his parents amid a sputtering job hunt.

Yet out of that gloomy scenario, Karpyak discovered the career direction he had been lacking. He’s set to graduate in May with his Bachelor of Science in Nursing degree, and he’s already got aspirations to pursue a Doctor of Nursing Practice degree in the future.

Karpyak’s family settled in Rochester, Minnesota, when he was 14 after emigrating from Ukraine. The son of a psychiatrist and a psychologist, he worked in several research labs at Mayo Clinic after graduating from Winona State University and moved up to Minneapolis for a contract job at the University of Minnesota before returning home.

Karpyak was doing volunteer clerical work at his mom’s psychology clinic in Rochester when a staff member encouraged him to check out jobs at Cottagewood Senior Communities, a local assisted living facility for patients with Alzheimer’s disease and dementia. He did, landed a job providing care for residents, and quickly started taking on more duties.

I care for the patients a lot. They're not just an assignment to me. I'm there to care for them

“It just came naturally to me,” he says. “I decided that the next natural step would be nursing. The nurses that I worked with kind of nudged me in that direction, saying I would make a good nurse.”

The ability to complete nursing school at the university’s Rochester campus was essential for Karpyak. Not only had he discovered his fondness for patient care at Cottagewood; he’d also met his wife on staff, and the couple had welcomed their first child by the time he began seriously eyeing nursing programs.

Since starting the BSN program in 2018, Karpyak has had to navigate a delicate balancing act with school and family responsibilities. His oldest son, now 5, was diagnosed with severe autism last year. Karpyak and his wife have another son who’s 2 and are expecting their third child shortly after commencement. Disruptions to childcare during the pandemic—as well as changes to his own coursework—have only added to that crunch.

“It's a lot of balancing and figuring out what's the highest priority at the moment,” he says.

He says in-person clinical placements—at Mayo, through the university’s partnership with the world-renowned clinic—have provided a much-needed change of scenery and outlet amid the pandemic. They’ve also given him tastes of the kind of direct patient care that drew him to nursing in the first place.

“I care for the patients a lot,” says Karpyak, who’s also been able to empathize with the parents of patients during a clinical stint in a pediatrics unit. “They're not just an assignment to me. I'm there to care for them. Even though I'm a student, it's my job. Yeah, I have a nurse who's looking over me. But when I'm in the room, that's my job, to make sure that they're OK.”

After graduating, Karpyak will bring that level of devotion to a position on the thoracic and vascular intensive care unit at Mayo Clinic. He says the fast pace suits him.

He’s grateful to have found a vocation that feels natural and integrates his life experiences along with the essential skills and knowledge he’s learned through his coursework.

“Honestly, it's been more fun, more exhilarating than I could really imagine,” he says.

Ready to take the first step?

The Office of Undergraduate Admissions want to get to know you! Here are two ways:

Schedule a visit: Nursing-specific visits are available Mondays and Fridays: 612-625-0000

Learn more about the Bachelor of Science in Nursing program