NIH-funded study has an eye on prevention

A treatment that delays the onset of Alzheimer’s disease by five years could save an estimated $89 billion in health care costs by 2030 and improve the quality of life of those affected by it.

Study coordinator Hannah Lewis assesses the rate of perceived exertion (RPE) to identify how difficult the exercise is for the participant.

Aerobic exercise and cognitive training are promising interventions, with current evidence suggesting that combining the two may have a synergistic effect that is greater than either of the interventions alone. A new National Institutes of Health-funded study led by School of Nursing researcher Dereck Salisbury, PhD, in partnership with Moai Technologies, is exploring if combining aerobic exercise with cognitive training that utilizes virtual reality will improve cognition.

While many of these types of interventions target people who have diagnosed diseases, participants in this study, Exergame, have subjective cognitive decline, which occurs when someone perceives that their memory or cognition is not what it once was, but scores on tests are fine. It is an important moment, as it is one of the earliest recognizable manifestations underlying Alzheimer’s disease.

“With this population we’re really looking at prevention. If we can target a therapy that delays the progression of the disease, it has a potential to translate to a greater amount of time that they spend their lives living in quality,” says Salisbury. “I look at exercise as being a form of medicine for Alzheimer’s disease, the cognitive spectrum and vascular diseases.”

Study participants receiving the intervention perform various cognitive tasks while cycling on a recumbent bike over the course of 30-50 minutes. They navigate through a virtual world on an iPad following a map, and when they reach specific destinations they may be required to solve a problem, organize various objects or complete a scenario using math skills. “A lot of the cognitive paths reflect a specific cognitive domain, so we’re looking at improving attention or memory,” says Salisbury.

With the feasibility complete, researchers have moved into the second phase, which aims to analyze the effectiveness of the intervention. Specifically the study is looking at episodic memory, executive function and global cognition, assessed by the NIH Toolbox Cognition Battery. Aerobic fitness will also be measured.

“I think it’s a very well thought out program. It is unique in its ability to target underlying risk factors and stimulate cognitive training in a population who are at a much higher risk for developing Alzheimer’s disease and related dementia,” says Salisbury. “I think if we can target these populations with a therapy such as this at an earlier point in the disease process, we may be able to delay the progression of disease. At the end of the day, that’s a really important thing.” 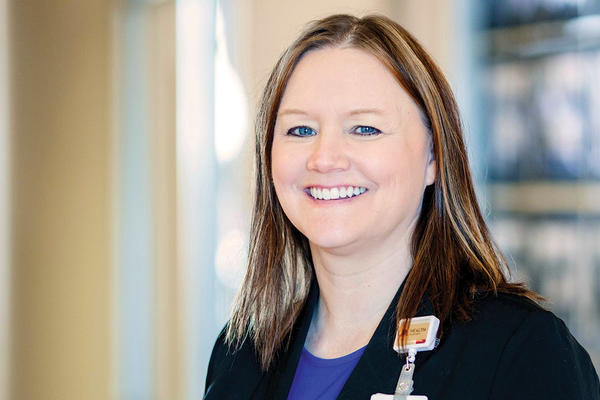 Putting her PhD into practice

Sandy Hagstrom works at the intersection of nursing research and practice

Reflections on the past, hope for the future